A squirrel wandered into the wrong location Sunday morning and caused a large power outage in Morganton. The outage affected about one fourth of the City's electric customers, but City Electric Department lineman were able to quickly restore power to affected residents and businesses.

Electric Department Director Brooks Kirby said the outage occurred at 8:58 am at the Rand Street substation located behind Case Farms. A squirrel climbed to the top of the substation and came into contact with one of Duke Energy's high voltage lines creating an electrical explosion and a short circuit.

"We typically have outages caused by birds and squirrels, but what has been unusual is that these types of outages have affected such large groups of customers," Kirby said. "As a rule, a bird or squirrel will knock out power to one or two homes, but this year has been quite different."

The outage started at 8:58 am Sunday morning, and the City Electric Department restored temporary power by 11:47 am. Kirby said about 2,500 electric customers were affected, half of which were commercial customers. By 4:00 pm, the City's electric linemen had made the repairs to the substation and started switching customers back on to their permanent power source.

"The City's lowest power usage is on Sunday morning, so it couldn't have happened at a better time," Kirby said. "If this outage had occurred during the week, we wouldn't have been able to make the repair as fast."

Kirby thanked the residents of Morganton for their patience and praised his electric department linemen who worked all day Sunday to restore power.

"I know power outages can cause disruptions to the daily routines of our citizens, and they can be frustrating depending on when they occur," Kirby said. "My crews understand that and they work very hard to restore power as safely and as quickly as possible. I am extremely proud of the city's electric department and their steadfastness in performing their duties. To have them come in on Sunday and work all day without breaks or food is a reflection of their professionalism, skill, and dedication to the City."

"As for the squirrels I wish it was open season year round. Some folks may see them as pretty furry little critters that need protection but to those whose lives are adversely affected by them they are, as my grandfather once said, nothing but wire eating tree rats," Kirby said. 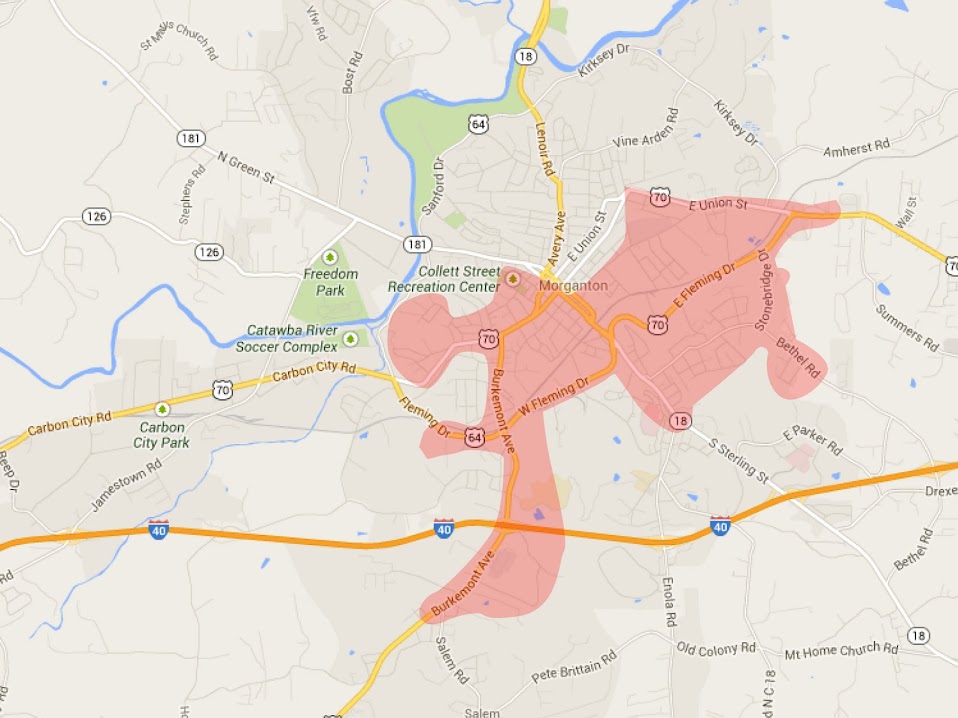 The area shaded in pink shows approximately who lost power during the outage Sunday morning in Morganton, NC.